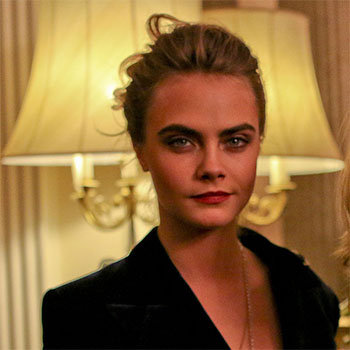 Cara Delevingne was born in London, England on August 12, 1992. Delevingne had two older sisters and attended a private school for girls until age 16. She began modeling at age 10 when she was featured in an editorial shoot for Vogue Italia. Seven years later, she was discovered by the founder of Storm Model Management and thrust into a full-fledged modeling career.

Sarah Doukas is the one who first spotted Delevingne, and who helped her to launch her career quickly. By early 2011, Delevingne was participating in Burberry's campaign; later in the year, she would do her first catwalk appearance for Burberry. Since then, she's been featured in ads for H&M, DKNY, Tom Ford, Yves Saint Laurent and Chanel. In addition, she's appeared on the catwalk to Jason Wu, Oscar de la Renta, Dolce & Gabbana, Fendi, Givenchy, Chanel, and many more. In 2012 and 2013, she participated as a model in the infamous Victoria's Secret Fashion show. She's been on the cover of Vogue in the UK three times and has been named recently as the brand ambassador of the watch brand TAG Heuer. It's been confirmed that Delevingne has cut ties with her modeling agency, Storm, and is choosing to now focus on her acting career – which launched as she played Princess Sorokina in “Anna Karenina”, alongside Keira Knightley in 2012. Such a move gained her a feature (and the cover) of American Vogue. Since then, she's been in several “B movies” and has been commended for her acting performances, though the movies themselves have been lacking.

Though she's launching her acting career now so we're sure to see her more, currently Delevingne is most well known for her career as a model. Her face has undoubtedly been seen in Burberry's and Dolce & Gabbana's ad campaigns numerous times as the “face” of those brands.

Where Is She Now

It is rumored that Delevingne continues to live with her parents outside of London in between traveling the world for her new acting career, and as she pursues certain modeling ventures.

The model and actress claim to identify as bisexual. In June 2015, she confirmed that she is in a relationship with American musician Annie Clark.